Ophrys lucis is one of the most interesting orchids of Rhodes. For orchid lovers who wish to see this species in the field, Rhodes is the ideal place. Here one can see all possible variables of the species fairly easily from mid February to mid March in a variety of habitats. It is a rather rare species forming small populations mostly in the central parts of the island.
Today I present some photographs in order to show the variability of the species. 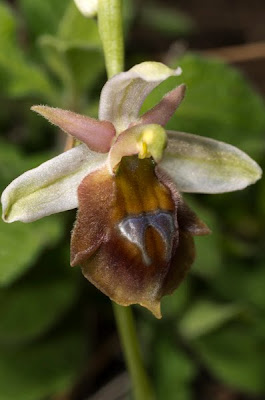 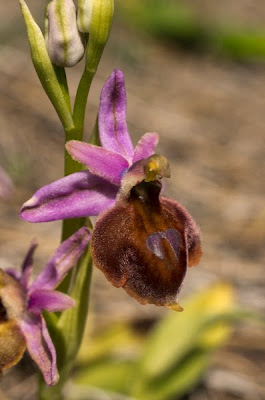 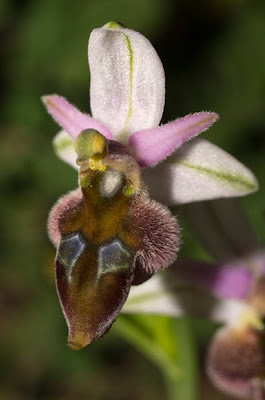 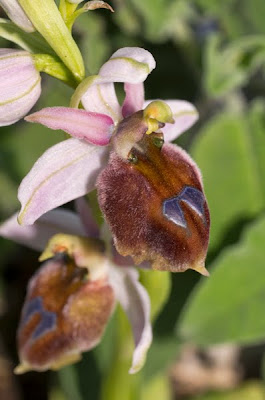 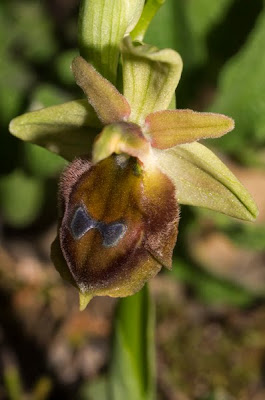 I hope you enjoyed it!
Αναρτήθηκε από Giorgos Pastrikos στις 12:36 AM No comments:

Ophrys sitiaca. The first Orchid of the season! 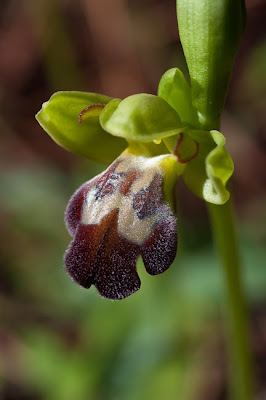 Ophrys sitiaca. Filerimos hill
It is like a rendezvous! Every new year, in the first ten days of January, I use to visit the nearby pine woods of Filerimos hill. There, under the shade of pine trees, Ophrys sitiaca is always the first orchid that begins to flower.
Happy New Orchid Year to all! 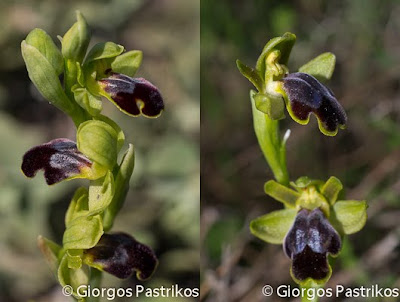 They both have a small lip (less than 1cm) with a yellow border around it. How can a non expert identify them? Identification of those two species is not easy but not impossible either.

One must pay attention mostly to the bending of the lip. The lip of Oprhys parvula is almost straight across the longitudinal axis, starting to bend (if at all) just after the 2/3rds of its length whereas the lip of Ophrys cinereophila is bending downwards right from the start, at the basal area.

Of course those two species, as the majority of orchids of the genus ophrys, have a different pollinator. Andrena tomora for O. parvula and Andrena cinereophila for O. cinereophila.

Ophrys parvula was considered endemic to the southern part of Rhodes island but recently Zissis Antonopoulos found similar plants in central Cos and Giannis Gavalas in Iraklia (Small Cyclades). It seems that this species is endemic to Southern Aegean islands. 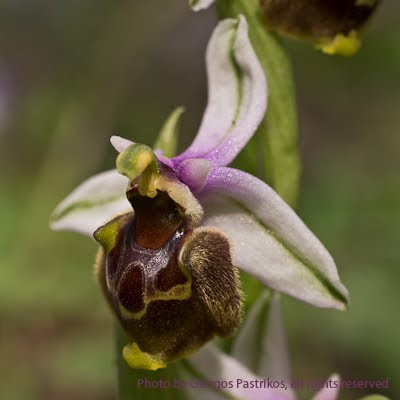 The first post of this blog couldn't be other than the list of orchids of Rhodes. I have used a taxonomy which is up to date and in accordance to the newest literature but I have done some additions and modifications in order to adapt the list to my own observations in the field. Totally in the list there are 76 taxa which they are distributed in 10 genera as follows:

The 76 taxa are as follows:

?= the presence of the species is under question but there are some evidences for its presence

Ophrys transhyrcana??= an Oriental species, maybe the plants of Rhodes are just a variety of O. mammosa

Cephalanthera epipactoides (extinct?)= the single plant of this species that I have seen on the island has been extinct but there are some reports for the presence of the species.
Αναρτήθηκε από Giorgos Pastrikos στις 7:09 PM No comments:

Welcome to my blog!

Let me introduce myself. My name is Giorgos Pastrikos. I' m a nature photographer and an empirical botanist. For many years I research and photograph the nature of Rhodes, especially, the wild orchids. During all these years I have visited nearly all possible orchid’s biotopes and in my archives I have many thousands of high quality, high resolution photographs of all orchid species. Therefore, if you are interested for the wild orchids of Rhodes, you are in the right place. In here you can learn all the news about Rhodian orchids. You can also arrange a guided tour to the best orchids’ biotopes. During this tour you will have the opportunity to see the most important and rarest orchid’s of Rhodes and to learn some photographic tricks and techniques which will improve your photographs. If you are not intended to visit Rhodes, you still can purchase some high resolution digital copies of my photographs to enrιch your collection of orchids.